The CRDA makes capital investments through bonds and loans in projects that would not attract capital in normal market conditions. CRDA investment in a project cannot replace public or private capital that would otherwise be invested in the project.

The Authority provides financial assistance for the following types of projects:

1. In projects involving a private developer, a minimum 10% equity contribution is required.

2. Projects must be eligible pursuant to NJSA 5:12-144(f). Generally, the funds should benefit the public at large and those of low and moderate income in particular.

Projects may be deemed eligible for CRDA financing if the funds are used in the following ways:

6. CRDA Construction Oversight, if required, up to $1,500 per month during construction, plus set up costs.

CRDA Notice of Proposal for Re-adoption of Rules

The CRDA Urban Revitalization Program, established by law in 2001, is a tax-incentive program to encourage the construction of new entertainment and retail venues in Atlantic City. The purpose is to further entice visitors to the City, as well as create new jobs and tax revenue for the State and local government.

The incentives for the developer to establish an entertainment-retail district are:

The Corridor Projects Fund was created as the result of a law passed in 1993 establishing a $1.50 casino parking fee and authorizing the CRDA to issue bonds to generate funds for transportation infrastructure and economic development projects in the “corridor region” of Atlantic City, which includes the area surrounding the main entrance into the city from the Expressway, as well as areas of heavy traffic and economic development along the multiple access routes into Atlantic City and the major thoroughfares within Atlantic City.

A legislative change in 2004 enabled the CRDA to issue bonds to create the $100 million Boardwalk Revitalization Fund for façade improvements and other capital projects on the Boardwalk that are consistent with the CRDA’s architectural design guidelines for the Boardwalk.

The Boardwalk Revitalization Fund bonds are repaid from two sources – a portion of required Atlantic City investments for economic development and a voluntary contribution by the casinos of a portion of their parking fee revenue, beyond the parking fee that the law requires the casinos to pay for the Corridor Projects Fund and the Casino Capital Construction Fund.

This project is expected to be completed by 2010 after expending $85 million. The balance of the funds were transferred to the Debt Service Reserve Fund from uncommitted fund balances under the Boardwalk Revitalization Project, so as to satisfy CRDA’s obligations under the Revenue Bond Trust Indenture. This action was required due to the the shrinkage in credit markets that intensified during the Fall 2008.

The Legislature directed the CRDA to create the Casino Capital Construction Fund and the Atlantic City Expansion Fund for non-gaming casino capital expansion projects. The legislation was in response to future competition by the approval of slot machines in Pennsylvania and New York, in 2003-2004,

The fund has leveraged more than $1 billion in hotel expansion projects resulting in the addition of approximately 3,500 new hotel rooms in Atlantic City. Two projects are in the feasibility stage with all funds committed and the application process is closed.

In 2004, the Legislature required the CRDA to issue bonds to create a $31 million North Jersey/South Jersey Projects Fund for North Jersey and South Jersey (not including Atlantic City) community and economic development projects. By law, a portion of the $3 casino hotel occupancy fee is used to repay the CRDA bonds. All money from this fund has been allocated.

Under the terms of the reinvestment agreement, each casino is required to pay to the CRDA 1.25% of its annual gaming revenues for 50 years, and the CRDA invests this money in eligible projects in Atlantic City, South Jersey or North Jersey, according to the following chart set by law. By law, the casinos are entitled to a return on their investments through the CRDA. 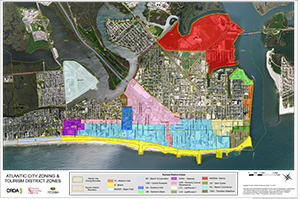