Prior to joining the CRDA, Ms. Farias was the Deputy Executive Director and Policy Director for the Atlantic City Initiatives Project Office (ACIPO). At ACIPO, she was instrumental in accomplishing the recommendations outlined in the Transition Report to help Atlantic City address outstanding operational and community development challenges. Among her accomplishments at ACIPO, she helped launch Atlantic City’s first Spanish Town Hall, where state and local officials spoke to the Spanish community members in their own language in real time. She was also instrumental in drafting ACIPO’s Year 1 Implementation Plan as well as helping to bring back the Latino Festival to Atlantic City after a 12-year hiatus. During her tenure, she was named on ROI New Jersey’s Influencer List for People of Color in 2019.

Prior to coming to Atlantic City, Ms. Farias was the Director of Urban Policy for the New Jersey Senate Majority Office. In her role as Director, she was required to work closely with the members of the Senate to create policy for the Community and Urban Affairs and Higher Education Senate Committees. Among her accomplishments, she has worked on policy addressing Atlantic City, foreclosures statewide, Super Storm Sandy, and she also helped pass legislation for student loan forgiveness for NJCLASS loans. Aside from her work in the New Jersey Legislature, she was also appointed to Governor Phil Murphy’s transition team as Deputy Director for Policy – Education, Access & Opportunity, where she was the lead on higher education policy.

Ms. Farias was raised in Wildwood, New Jersey, and graduated from Rutgers University with a Bachelor’s degree in psychology. She earned her Master’s degree, graduating summa cum laude from the Rutgers University – School of Public Affairs and Administration in Newark. At her Alma, she also served as an adjunct faculty member where she has taught community development, social capital building and public administration. She was honored by the New Jersey Hispanic Leadership Association as a Champion of Change and she also received the Latina Pioneer award from the Latinas United for Political Empowerment (LUPE) organization for her work in the New Jersey Legislature. She is currently a LeadNJ fellow for 2021 and she is a proud Big Sister to her Little Sister Stephanie as a member of the Big Brothers & Big Sisters organization for more than nine years. 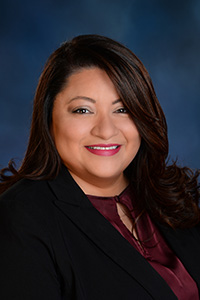