In the summer of 1993 Marty enrolled in the EOF Program at the Richard Stockton College of New Jersey. He graduated with a Bachelor’s of Arts in Communications. During his four year career, he was a stand out basketball player, winning consecutive N.J.A.C. titles in ’95-’96, (New Jersey Athletic Conference) and participated in the NCAA Division III Tournament in three years going to one “Elite Eight,” two “Sweet 16” and one E.C.A.C. Final (Eastern Collegiate Athletic Conference). Marty had an outstanding career as a two-time all N.J.A.C., two-time all E.C.A.C., and two-time all Atlantic Region. Marty finished his career with 1,238 points and is the Richard Stockton College of New Jersey’s All Time Leading Rebounder.

Six days after graduating, Marty was signed to a professional basketball contract with the Atlantic City Seagulls (United States Basketball League). The Seagulls went on to win the 1998 United States Basketball League Championship that season. Afterwards, he worked as a Social Caseworker for the City of Atlantic City. Marty wanted to become active in the community and the easiest way was to give back through basketball. In December of 1998, he started The Elwood Roberts Midnight Basketball League of Atlantic City, in honor of the late great Elwood Roberts. The League targeted at risk adults and provided a competitive and structured recreational environment in the late night hours, a league that he facilitated for 8 years. In March of 1999 he received a promotion as the Safe Haven Program Coordinator, where he coordinated Youth and Senior Citizens programs.

Marty has received various Community Service awards. He received the AtlantiCare Outstanding Leadership Award for the Greater Atlantic City Area, The African American Male Conference Community Service Award, and The IRC Council of the Richard Stockton College of New Jersey’s Vera King Farris Award, The Iota Phi Theta Fraternity Inc. Commitment to Youth Award, Delta Sigma Theta Sorority “It’s Reigning Men Award”, The Manhood Award from Omega Psi Phi Fraternity, The Council of Black Faculty and Staff of the Richard Stockton College of New Jersey Distinguished Alumni Award, The Bangladesh Association of South Jersey Appreciation Award, The Fellowship of Churches of Atlantic City & Vicinity Leadership Award. Marty has also been honored by several youth organizations such as The Boys & Girls Club of Atlantic City, The Atlantic City Dolphins, Xclusive Drill Team, Atlantic City Youth Exposure, Triple B Basketball League, In My Care Mentoring Program & Faceless Fashions. In May of 2016 Marty reached an educational milestone by obtaining his Masters Degree in Educational Leadership from Cheyney University of Pennsylvania. In October of 2016 Marty was inducted into The Stockton University Athletics Hall of Fame as a Basketball Player. In October of 2018 Marty was inducted into the Stockton University Athletics Hall of Fame again, this time his team who reached the Elite 8 during his Junior Year, the 1995-96 season was inducted. In February of 2020 Mayor Small was honored at the Tri-State Black History Awards. 2020 was a big political year as Marty helped defeat a Change of Government Referendum by winning 80% of the vote, the democratic primary with 65% of the vote and over 70% of the vote to secure another year in the Mayors office.

Marty credits his life lessons and experiences for preparing him for to succeed and lives by a quote from the Late Great Dr. Martin Luther King Jr., “The Ultimate Measure of a Man is not where he stands at moments of comfort and convenience, but where he stands at times of Challenge and Controversy.” Marty is married to Dr. La’Quetta Small, principal of Atlantic City High School. They have two children, Jada, 13 and Marty Jr.,11. He shares a special relationship with his aunt Gloria Small, who helped raise him. He credits his success to his late mother Annette Small and his late Great Aunt Lucille Curley. 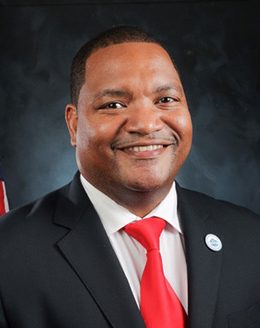