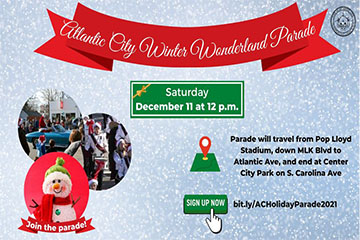 Grab a spot along MLK Boulevard, Atlantic Avenue, and/or at Center City Park to watch the parade & performances. Don’t miss Santa Claus as he is planning on joining in and will be escorted by members of the Atlantic City Fire Department at the end of the parade lineup. The Atlantic City Salvation Army Corps will also be providing hot chocolate at Center City Park! Parade will take place rain or shine.